During the late 1940s and early 1950s the diesels eliminated the hazy pollution in town which soiled any fresh wash hanging out on lines to dry, the

engineers were proud of the new diesels. MOPac set aside a day to have the engineers photographed in one of the diesels. Pictures are by K. Melton, a 40

boosters, puts new life into “Old Molly” at Dupo,Ill in 1927. Prior to the addition of this extra power, the 2-8-8-2 required a helper engine to shove a full

road lentgh train of loaded coal hoppers up the 2.2 grade of the hump. The twin boosters did away with this need while increasing tonnage capacity almost

30 percent. The tender underframes were especially developed by the Commonwealth Steel Co. of St.Louis, Mo. to accommodate the double truck

installation while MoPac built the tender body with sufficient water capacity, 14,000 gallons, to insure a full eight hour shift without interruption. The two

ten-inch-high pipes protrudung from the tender’s water compartment in this tender-dominated view are exhaust pipes for the auxiliary engines. A

veritable Dante’s inferno of smok, steam and flailing rods surrounded the 40000 working the hump on a frigid day.

Aside from the tender, little variation occurred in the 400’s appearance over the years. Most obvious was the replacement of the original oil burning

headlight with a modern Pyle National electric and a greatly enlarged front and rear sand dome as evidence in this 1946 view at Dupo Ill. C.T. Felstead 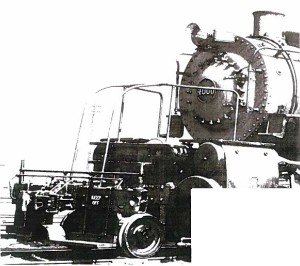 Class ML-55 could lay claim to only one locomotive on the MoPac. Assigned the even number “4000” which on the MoPac immediately placed the machine

in a one of a kind experimental class, this was the road’s only venture into the field of mallet articulated locomotives. A 2-8-8-2 with 55 inch drivers the

4000 was a true compound locomotive built by Baldwin Loco-motive Works in 1912 for the St. Louis, Iron Mountain and Southern. Built specifically for

shoving trains over the hump in the then new Dupo, Ill freight yards where a high tractive effort at low speed was the prime requisite, the engine was built

with an automatic starting valve between the live steam supply and the receiver pipe. This valve enabled starting in single expansion with automatic

change to compound when working. The tractive force, while working compound, was 94,500 pounds. Patterned somewhat after similar mallets on the

Northern Pacific old 4000 was typical of such early cumbersome machines of very limited horse-power. Nicknamed “old 4000, old Molly” and other

assignment sent the mallet to the stored dead track adjacent to the roundhouse wall. The engine remained fairly static until 1927 when in keeping with its

number it was revived as an experiment in increased tractive effort and equipped, as was 2-10-2 No. 1729, with a new company-built twelve-wheel tender

with Bethlehem auxiliary locomotives, referred to more commonly as tender boosters, on both trucks. Total tractive effort rose to a formidable 122,400

the Dupo hump at the hind end of the continuous flow of coal drags arriving from the southern Illinois fields. This “Erie triplex” look existed until 1937

armament, the 4000 lost its big tender with double boosters. Minus its extra “oomph” the mallet added to its repertoire that same year the ascents to the

newly opened Municipal Bridge over the Mississippi River at St. Louis. The new bridge crossing had replaced the ferry operation near Dupe. The mallet

soon became a frequent sight in the St. Louis area on transfer drags and occasionally on trips down the original Iron Mountain main line to bring back the

heavy drags of granite cobblestone paving blocks from the quarries at Graniteville, Mo. 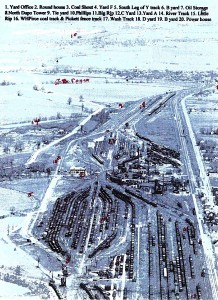 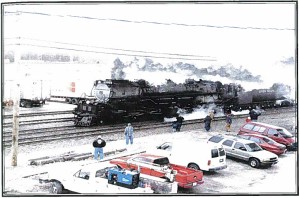 One of the last steam locomotives to come through the Dupo yard 1988. 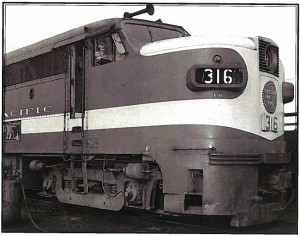 any fresh wash hanging out on lines to dry, the engineers were proud of the new diesels. 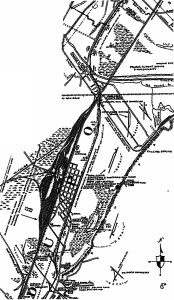 The Missouri Pacific’s vast yard complex at Dupo provided ample interchange for not only the TRRA but for the Waterloo Road as well. The Dupo name

was a corruption of the Prarie Dupont name, used even before the railroad came, and it stuck. (Drawing on the left and map by George Fehlm from Ray 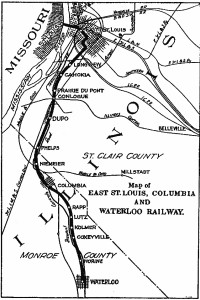 E,St.L C & W map of the 1920s shows the paved road which paralleded the line and contributed to its early demise. In the timetable, Conlogue Crossing is,

of course, the TRRA crossing and for which there was a very modest shelter. (map from Berl Katz collection)

With the demise of Mop passenger service on the Missouri Pacific’s Illinois Division, the Dupo station served as the agent’s office, as in this 1961 view.

Cotton Belt passenger trains did not normally stop here. On April 6, 1991 SP 7431 rushes past the newest controlling facility on this section of the line,

much changes from even thirty years previous. 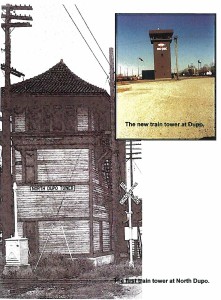 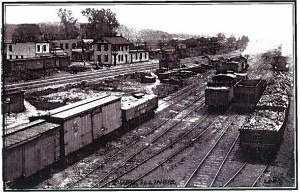 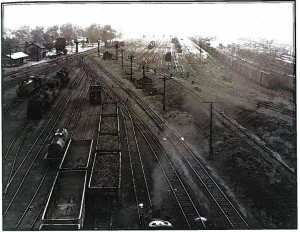 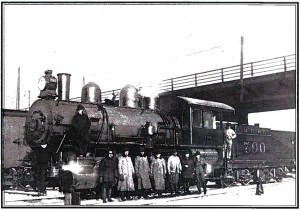 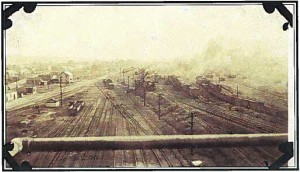 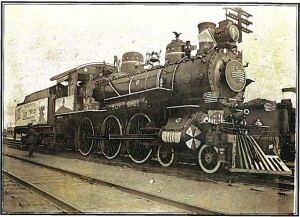 band went through Dupo to gather a crowd, and then speakers would create a show at the Roundhouse to sell bonds.

We already are blessed with that friendly small-town feeling, and if we all become involved, we can welcome the challenges of the next 100 years.